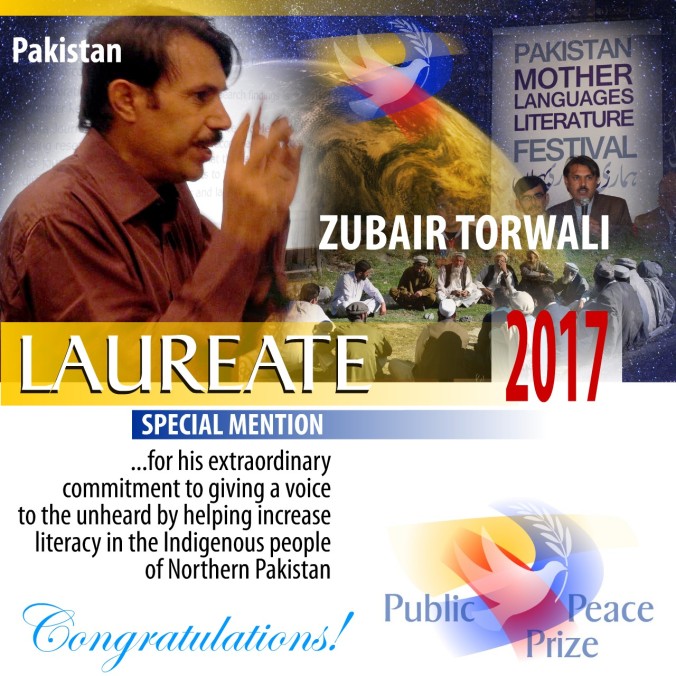 Zubair Torwali lives in Bahrain, in the Swat Valley of northern Pakistan, and is a social, cultural, civil society and human rights activist, author, journalist, researcher, and the most powerful voice for the rights of all the marginalized linguistic communities of his region. He has been justly called “The voice of the unheard”.

In 2007, he founded the Institute for Education and Development to work to give an identity to the ethnic minorities such as the Torwali, Gawri, Gujars and others. Eight years ago the Torwali people didn’t know who they were. He began to write “Torwali” as his family name and since then over 1200 youth began writing Torwali with their names, a move which has given immense confidence to this indigenous people, who are no longer ashamed of their unique identity, but rather feel pride in it. Through his writings and media engagements, Zubair Torwali has made the Torwali community known both within Pakistan and internationally.

In 2009, after he witnessed beheaded bodies with his own eyes, he wrote a disturbing article which gained national and international recognition. It was called “From Swat – with no love” and it prompted civil society protests and subsequent government action against Taliban insurgents. His media articles and activism are testimony of the inexhaustible work he has been doing for these communities. He has been honoured by Human Rights Watch for his commitment to freedom of expression in a time when speaking up in Swat was extremely dangerous, a time when he had to flee his home for seven months.

The schools that his organization has established in the community to increase literacy have also helped to put female teachers on the forefront of quality education, and have become a beacon of hope for the future of education in one of the most troubled areas in the world.

Each comment of appreciation or encouragement
published on this page (at the bottom) or sent by email to contact@publicpeaceprize.org
= 3 supports/votes