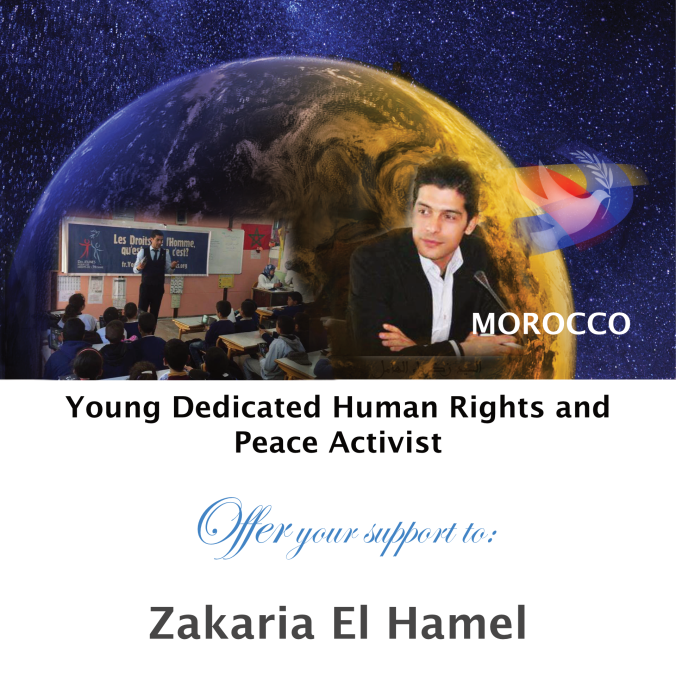 Distinction granted for its commitment to peace and human rights. To foster dialogue that enhances understanding, respect and peace between people of different cultures and religions. CONGRATULATIONS!

Mr Zakaria El Hamel as a dedicated Human rights and Peace Activist in Morocco, is encouraging a new Generation to stand up for peace and human rights in turbulent Arabic World.

Zakaria El Hamel, 36 years old, is so important for Morocco: for almost two decades, Zakaria has dedicated himself to creating a culture of tolerance and understanding by instilling an awareness and appreciation of human rights. Born in the city of Berkane in northwestern Morocco, Zakaria was introduced to equality and religious diversity at a very early age. He studied law in university, and in 2005 he founded ‘‘Youth for Peace and Dialogue between Cultures’’ in Oujda, where he now lives.

As the President of youth for Peace and Dialogue, Zakaria began to meet and collaborate with national and international active human rights groups to promote intercultural action. In August 2010, he took part in the Youth Summit for Human Rights International (YHRI) at the United Nations in Geneva as the Youth Delegate from Morocco. This event gave him a new inspiration in the following years to help protect the country from the growing threat of fanaticism in nearby lands by promoting all human rights, including freedom of religion and expression.

Zakaria reached further for even more help: Working alongside religious leaders from the Catholic, Islamic, Christian and Methodist faiths, Zakaria next staged an interfaith event in the Saint Louis Church in Oujda. This celebrated ‘‘World    Interfaith Harmony Week’’- a United Nations initiative to increase peace, tolerance and mutual understanding between different faiths.

With the contribution of different organizations, he has promoted human rights, respect for freedom of expression, thought and belief, through workshops and conferences. With his message he has reached street vendors, children, young leaders of schools and groups in different towns and cities throughout the country. From the Moroccan Observatory of Education and the National Council on Human Rights to the United Religions Initiative, more than twenty organisations and groups formed alliances. Together, they now work with Zakaria and his Foundation about Human rights education all over Morocco, maintaining the long tradition of peace and tolerance in this North African Kingdom.

Zakaria El Hamel is Member of Anna Lindh Foundation and Member of the Coalition for the International Criminal Court too.

This is the certificate in his language that Public Peace Prize gives him to highlight this honorable distinction: Leave a reply at the bottom of this page or on our Facebook page at: https://facebook.com/publicpeaceprize.prixpublicpaix/