On May 28th, Narine Dat Sookram, the 2016 Public Peace Prize winner in the category of Social Integration & Community Peacemaker, was presented with a commemorative plaque. He received this honour during the Caribbean Dreams Concert in Kitchener, Ontario (Canada).

It is very fitting for him that the award be presented not only at the annual concert that he has been organizing for the immigrant community for the past 14 years, but also that it aligned with the commemoration of Guyana’s 50th Jubilee of independence. A member of the Public Peace Prize team was in attendance to present him with this well-earned mark of recognition and appreciation.

Narine is of Guyanese descent, and his concern and support for others branches out from his local community to the greater Canadian community, extending to the Guyanese community both locally and abroad.

My views on peace! 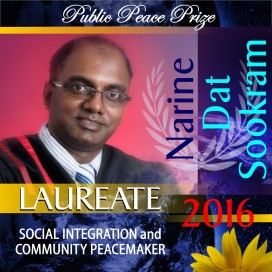 When it comes to peace I think the most important thing for me is to have people come together to celebrate life together as one.  I also think that it is time that people look beyond our differences not only to respect each other but to make sure that every human being has equal opportunity.  One of the things I try to put into practice is to live my life with a conscious mind, because I believe that peace itself starts from home and I think that it is everyone’s obligation to be part of the process.

However, because of my passion for a more peaceful world, I have initiated a community concert and a community radio show to spread the importance of peace.  In particular, with the Caribbean Dreams Concert, I showcase talents from different cultures and the idea behind it is that I want the broader community to have a better understanding of other cultures, because I strongly believe that the more people are knowledgeable of other cultures the less likely they are to be judgemental.  But when I really come to think about it, there is no better way to promote peace than to have a diverse set of ethnic backgrounds under one roof, because to me it is the best way to breaker the barrier between our differences.

My weekly community radio show is another initiative that is a powerhouse that I use to promote peace.  The good thing with this show is that I get to choose the type of songs I play and usually it’s songs that the Caribbean/West Indian people can listen to and feel a sense of home.  But best of all I get to connect with my listeners locally and internationally where I get to influence them in a positive way.  I really want people to know that there is not a specific formula to promote peace in the world around us, but it is surely possible when we can work together to achieve a common goal.  Though the world is divided, it is up to us to make that history.