“To heal the unhealed is the raison d’être of our Institute for Healing of Memories, so that the victims are not transformed in perpetrators.” 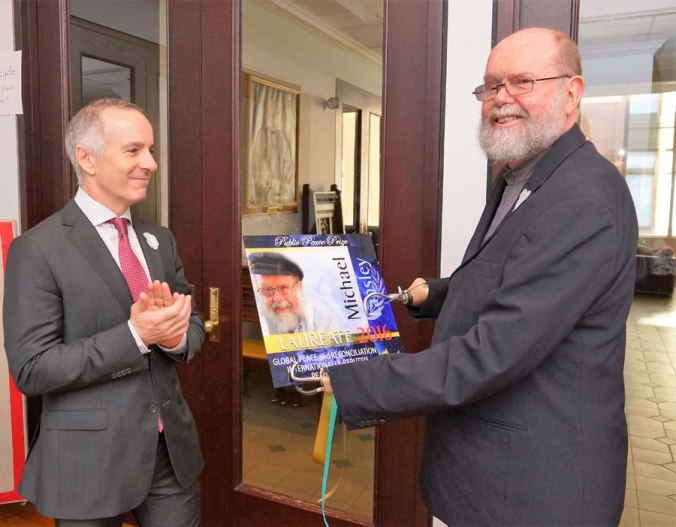 The presentation was made by Brian Bronfman, cofounder of Grant Peacemakers Network and Outils de paix network, as the organizers and financial partners of the Centre de services de justice réparatrice welcome Michael Lapsley who will facilitate the first workshop in Canada offered by the Institute for Healing of Memories based in Capetown, South Africa.

Thank you for the honour you have bestowed upon me. I am humbled by this acknowledgment of the work I do with my colleagues in the Institute for Healing of Memories.

In our Institute for Healing of Memories, we say that all people have a story to tell, and every story needs a listener.Whenever we are able to listen with compassionate hearts to one another, we find that it is our shared pain that connects us. A key element in peace making is the full acknowledgment of how people have been wronged, and the opportunity to be heard. To break the chain that turns victims into victimisers, there needs to be safe and sacred spaces where people have permission to express how they feel about what happened to them and begin to detoxify. Dealing with the psychological, emotional and spiritual effects of the past are equally as important components of peace building as political, economic and social transformation.

Michael LAPSLEY is a priest from South Africa who works with victims as well as authors of apartheid and other forms of repression and exclusion, and is publicly recognized for his disarming strength that has transformed wounds into powerful healing and reconciliation. He is visiting Montreal to offer a worship using his approach for healing memories.

It is time to nominate people or initiatives for the 2017 Public Peace Prize!

The Public Peace Prize is a citizens’ initiative without borders. Its sole goal is to make better known as many peacemakers and peace initiatives as possible.

Use your voice for peace!

Help make better known those who are working for peace by nominating them for the 2016 Edition of the Public Peace Prize.
Send the name of a peacemaker and the reasons why they should be nominated to:

Even simpler and more accessible!

The stages and procedures have been simplified into three steps:

Anyone can propose a peacemaker, a project or an initiative for the Public Peace Prize. All you have to do is present the reasons why you think it’s important that this person, project or initiative should be publicly recognized for their contribution to peace by sending a half-page written introduction along with a few photographs.

In order for a proposition to be validated by the public, we ask that a minimum of ten different people endorse it by sharing supportive comments on the PPP Facebook page. Once the proposition is validated, the person, project, or initiative is officially nominated for the Public Peace Prize.

All the different ways for showing support – by sending comments, sharing on social media and other mentions on the Internet – are considered to be forms of appreciation and recognition by the public. New this year: at the end of the nomination process it will be possible to send a “thumbs up” to the peacemakers, projects and initiatives that have been nominated.

Besides showcasing peacemakers, from now on projects and initiatives presented by the public will also receive a mark of recognition during the 2016 Public Peace Prize. If you would you like to present a local initiative or highlight the contribution of a film, a book or any other form of peace work, please present them to us!

More egalitarian but just as public!

In order to ensure the visibility of all participants in the most unbiased and egalitarian way possible, the peacemakers, projects and initiatives will be classified according to a proportional table that takes into account the category, the context, and the degree of notoriety they already possess.

Therefore a local peacemaker who is little known but proportionally supported by the public will have as good a chance to be highlighted in his or her category as an international personality who already has a large support network. A dozen distinct categories will be created to make the Public Peace Prize as egalitarian and as representative as the many peace processes brought forward.

Finally, just a reminder that the only objective of the Public Peace Prize remains making better known as many peacemakers, peace projects and peace initiatives as possible, beyond all forms of competition!

The candidates nominated last year can be presented for nomination again this year.

The nomination and recognition process will extend across the entire year of 2015, to end with the World Peace Day celebrated on January 1st, 2016, during the 24 Hours for World Peace event.

The 2015 edition of the Public Peace Prize made a considerable impact. The most extraordinary part is that even if the Public Peace Prize does not offer prize money, it is very valuable, not only because it is the only peace prize who’s laureates are chosen by the public, but in particular because it makes better known, around the world, peacemakers who may otherwise remain little known except in their own respective networks. More than 20,000 new visitors from 20 different countries discovered the website this year during the nomination period. Even more impressive: the public offered 143 633 supportive actions to the 2015 Public Peace Prize candidates, through 132 814 profile views, 6700 “Likes” and 4119 encouraging comments!

Just like last year, the Public Peace Prize remains a completely unconditional prize, without grants or sponsors, organized by simple volunteer citizens of the world, with the goal of fostering recognition of peacemakers and peace initiatives beyond the boundaries of culture, religion, and social affiliations!

All non-profit organizations can become partners of the prize by associating with the team to help make the prize better known through their own networks.

Many thanks for your huge participation

Thank you for using your networks to circulate the good news about these inspiring peacemakers working for peace around the world.

The nomination period for the 2016 edition of the Public Peace Prize is now open until May 30th, 2015. You can already be on the lookout for people or groups who are building community, weaving connections in populations facing conflict, promoting peace education and fostering a culture of peace. A maximum of only 24 finalists will be accepted for the 2016 competition, so send your nominations in as soon as possible!