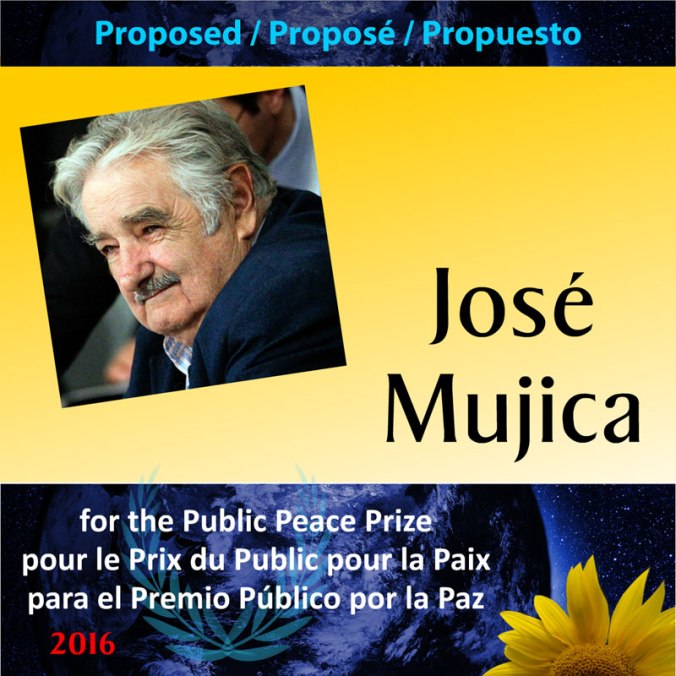 José Mujica, the former president of the Republic of Uruguay from March 1, 2010 to March 1, 2015, is proposed as a candidate for the Public Peace Prize. During his term, he donated 90% of his salary to charities. SUPPORT THEIR CANDIDATURE BY SHARING YOUR STORIES ABOUT WHY THEY DESERVE TO WIN. ONCE WE HAVE RECEIVED TEN SUPPORTING COMMENTS, THIS PERSON WILL BE OFFICIALLY NOMINATED FOR THE PUBLIC PEACE PRIZE.

José Mujica deserves all my respect. During his entire term in office, he did not alter any aspect of his life and remained faithful to his beliefs.

He declined to live in the presidential palace and preferred to live in his humble farmhouse, a small, weathered dwelling with a corrugated sheet roof. There, he resided with his wife, Lucía Topolansky, a senator, and, like him, a former revolutionary, and his three-legged dog, Manuela. During his time in office, he had no staff, other than two guards who ensured his safety. Mujica refused to “play president. I would have to have three or four servants following me. I wouldn’t be able to get up in the middle of the night in my underwear to go to the toilet.” Furthermore, as he had few belongings, he did not worry about being robbed.

While in office, he would often be seen going shopping or, at times, picking up a hitchhiker in his 1987 Volkswagen Beatle. His simplicity was also reflected in how he dressed: He would attend very important meetings in his sandals.

During his term, he donated 90% of his salary to charities and to organizations for social housing. In the winter, when shelters were filled to capacity, he opened the presidential palace to the homeless. He also legalized same-sex marriage, abortion and the use of marijuana, lowered the salaries of ranking members of his party and opened his country to former Guantanamo detainees.

Regarding the legalization of same-sex marriage and abortion he stated: “Abortion is as old as the world. Gay marriage (is) older than the world.” “Not to legalize it would be unnecessary torture for some people.”

Mujica agreed to receive former Guantanamo detainees as refugees, free to leave the country whenever they wished since he believed that Guantanamo was not a jail but a kidnapping nest because a jail assumes it is subject to some sort of rule of law. “What soul in this world could be so rotten not to have the courage to give a hand to defend a just cause.”

He preached simplicity. Having only the minimum, he considers himself rich because he has time to dedicate himself to motivating occupations. “That is true freedom, austerity, consume little.” He reminds us of the great philosophers Epicurus and Seneca, and the Aymara Indians who declared: “The poorest is not the one who has little. The poorest is the one who needs a lot to live.”

In his speech before the UN General Assembly, he invited young people to withdraw from the current financial system which, because of its demands for rampant consumerism, destroys families and exhausts the planet’s resources. “Development cannot go against happiness.” He asked: “Is this the fate of human life, hyper-consumerism?”

Before becoming president, he was a guerilla fighter and spent more than 13 years in the prisons of the dictatorial regime (1973-1985). He was beaten, humiliated, put in isolation for nine years with insects as his only companions. For seven of those years he was not even allowed to read a book. This taught him to survive with the strictest minimum. He was also tortured and bullet wounds cover his entire body.

He stated: “I do not regret what I lived. I would never have learned as much as I did. In life, we learn more from pain and failure.” Today, he says, “War is a barbaric, prehistoric method. No matter what the reason for the war, the ones who pay the highest price are always the weakest and those least responsible.” “Living intensely is worth it. You can fall down one, two, three, 20 times, but remember you can get up and start again. The only losers are the ones who stop fighting and the dead are those who no longer fight for life,” he declared.

He considers himself a “former revolutionary” and a “peasant with a vocation.” Mujica said: “For ten years I lived in extremely hard conditions. If I had a mattress to sleep on at night, it was like winning the lottery. So I learned how to sleep with nothing…”

“Let us concentrate that human life is a miracle, that there is nothing more valuable than life. And that our biological duty is above all respect for life, to boost it and understand that we are the specie, it’s us.”

Image caption: “Don’t tell us that there are no resources if it is possible to spend 2,000 million dollars per minute in military spending.” José Mujica, the president of Uruguay