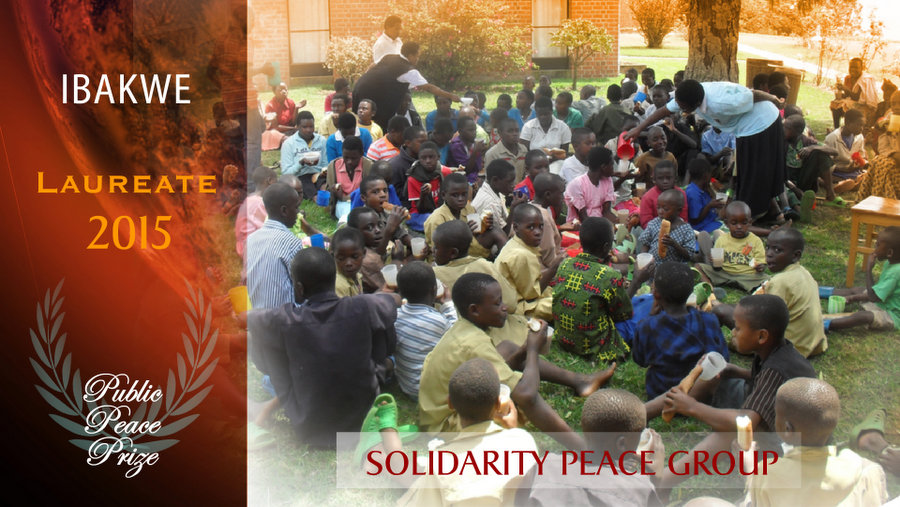 In the SOLIDARITY PEACE GROUP category, the laureate is the Rwandan group IBAKWE who collected 58 % of public support (and nearly double the minimum points required to become a finalist in this category).

IBAKWE is an association made up of people trained at the Institute of Integral Human Formation of Montreal (IFHIM), in Canada.

In the Kinyarwandan language, IBAKWE means courage, audacity and quickness. Working with Ibakwe means working with will and enthusiasm for a common goal: to train “peace-bridge builders”. The word Ibakwe also evokes the image of an eagle flying above its’ young to awaken them and show them how to fly.

The spirit that drives Ibakwe’s members is their desire to become women and men motivated by universal love, capable of acquiring more inner freedom in order to teach others how to become peace-bridge builders in their own environment. After the drama of the Rwandan genocide in 1994, the necessity to help people get back on their feet and build peace became extremely urgent. Cries for help came from all around.

Almost 20 years ago, people from both ethnic backgrounds were trained to become peace-bridge builders in the very midst of their differences. This training is open to everyone: believers and non-believers, rich and poor, black and white, educated and illiterate, youth and adults, women and men. Across the country, in nearly 1000 sessions have been offered since 1998, and children, youth and adults have received training to make them “Peace First-aid Workers” or Peace-Bridge Builders”. Among them are mental health workers, doctors without borders, peasants, farmers and breeders, officials from Caritas Rwanda, genocide widows, and wives of prisoners. One member of the IBAKWE group founded an orphanage and another member took in about thirty children whose parents were killed in the genocide.

The group has also worked with officials from Gacaca courts[1] (village justice systems) and continues to work with health centers, primary and secondary schools, universities, parishes, families, refugee camps and religious training homes. The group reaches students while at school or on vacation as well as youth associations. More than 1000 people are trained every year in sessions or through personal follow-up. Thanks to the training they’ve acquired, these people have found peace in their hearts again, and have become supporters in their communities. 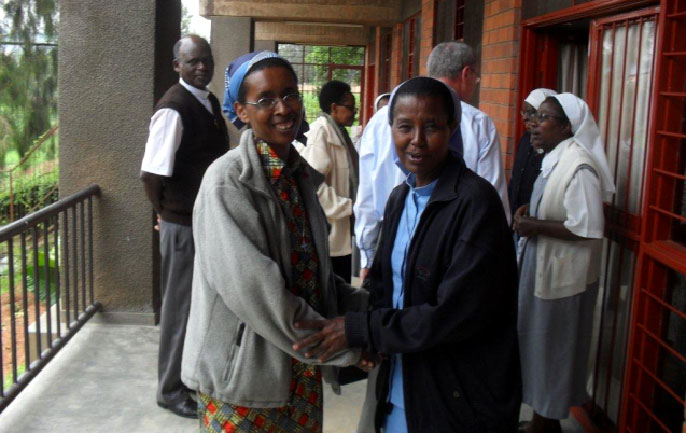 Learning to build bridges for peace

During the training sessions participants learn to see the reality of their world, their country, their region and their family. They also take a good look at their daily lives to discover how each person already seeks to build peace bridges. By becoming more conscious, participants learn to destroy the walls that separate them from others, and using their vital human strengths, they learn to see others as people too. To fully experience this, participants are called to head out, two by two, on expeditions into the hills, in order to meet strangers and build bridges of peace with those they meet.

To become a peace builder they must learn how to manage stress and balance their physical and psychic energies. Participants are taught how to listen to their bodies and to be mindful that the hostility they may feel does not paralyze their vitality. They learn from the inside-out how to live from a place of universal love that recognizes others as people in spite of their differences.

Couples and families at peace

Members of the Ibakwe group started out as resource people during three sessions offered by the IFHIM from 2012 to 2014 to couples from Byumba to help them become “peace families”. Following these sessions, the couples began to make changes in their lives as well as in the way they treated their children. Wanting to share what they’d learned, they helped other couples in their neighbourhood in Rwanda, and even in Uganda so that their families could also become peace families. This experience in Byumba inspired members of the Ibakwe group to reach out to other regions of Rwanda. Other couples were contacted in Kabgayi, Mbazi, Huye, Busoro, Cyangugu, Nyamata, Ngoma, Rusumo, Remera. The path they shared truly allowed them to train other “peace couples” which lead to “peace families”.

“A young woman was obsessed with hate towards the people who had killed members of her family. She knew them and did not want to run into them. She avoided them and sought out revenge, even if the law was doing its job. After several years, following peace-bridge building sessions where she learned to recognize a person as a person, to manage her hostility and taste the joy of life experiences that went beyond inner obstacles to create links to others, she came to understand that only love can bring peace. She is now able to speak to them and even help them when they need it.”

Here is a story from Byumba, North of Kigali, where the Little Peace Bridge Builders [2] experience was initiated:  “These young people do not limit themselves to staying disciplined in class and achieving the best results possible at school while enjoying the privilege of this training. They are also open to those around them, to others. They formed a community of peace builders to clean the church. They visited the sick at the hospital, prisoners, and Peace Bridge Builders in other communities. They started a football team. They taught others to appreciate writing, especially person writing that talks about life experiences. In other words, they radiate in their community and have succeeded in transforming their own families who now consider them to be people, and even collaborators because of their commitment.

“…I had a personal problem: a brother who had been killed by an Interahamwe (Hutu militia). Wherever I went, if I saw a soldier, I just couldn’t stand it, I felt rejected. When I participated in the session on the impact of breaking down walls between people, suddenly it made sense (…) while talking to someone in the session (…), I saw my own problem come up and I was able to relate to it. When I left, I saw a group of soldiers; it was my first chance to confront my wall. I walked up to one of them and said hello, and he said ‘’I see you are afraid… why are you afraid?” So I said hello to the others too! Now, I no longer feel like I used to when I meet a soldier; the fear has passed.”

IBAKWE, a group that practices what it preaches

“What is most touching about this group is that the members of Ibakwe who work together belong to different ethnic groups. Ethnic groups who were enemies at the time of the genocide. Other trained people also joined this original group, all with the same goals: working to establish and to nurture peace in the hearts of Rwandans; working together to be more humane people, who can have their dignity back and enjoy their lives. Today, thousands of people have been reached by the IBAKWE group. It’s the strength of loving people!”

IBAKWE helped us… we are:

– women, survivors of the genocide, often widowed, now capable of maintaining life projects, jointly with other women whose husbands are in prison for the genocide;

– children from refugee camps in Congo, in orphanages, abandoned children, without parents, survivors of the genocide who lived together for two years in the same orphanage;

IBAKWE as a path to peace and reconciliation

“After the Rwandan genocide, the feelings of fear, insecurity and mistrust that reigned across the country made inter-ethnic relations extremely difficult. To support reconciliation and the construction of peace in Rwanda, IBAKWE trained Peace-Bridge Builders, people who were able to create a snowball effect in helping other Rwandans get back on their feet, regain their self-confidence and trust in others to be able to re-establish conditions for peace and reconciliation around them. Thanks to this training, they become capable of contributing to peace rather than maintaining division and to let go of the prejudices that separate people.”

“During the judgment period by the “Gacaca courts”, the interventions by Ibakwe members contributed greatly to a process of justice and peace by using the tool of recognizing vital human strengths. Their presence allowed many people to work through their tasks, and they also trained many other peace workers.”

“Experience has shown that the commitment of the IBAKWE group has very positive effects and provides a concrete path towards reconciliation. People who participate in this training become  capable of conflict resolution through dialogue, without police intervention.”

“I am a missionary in Africa (R.D.C) and I see how much this continent suffers from tribal divisions and all kinds of violence. If only more groups like IBAKWE could be created elsewhere! Peace would spread, because peace begins within and moves outwards.”

It’s within the context of the period following the genocide that the IBAKWE-Rwanda group came into being in 1998. The peace workers multiplied rapidly because the community leaders invited and continue to invite a large number of people to be trained in Montreal so that they can return to Rwanda and help others get back on their feet using their vital human strengths.

The people trained had already organized a working group in Rwanda since 1996. They met to support and help each other and stayed in constant contact the IFHIM in Montreal. Due to the growing number of people, it became necessary to organize a framework of regular contributions. Twenty-five people trained at the Institute, now working in the field with the Rwandan people, decided to form the Ibakwe association. They continue to be followed and supported by professionals at the IFHIM.

In 2007, an internal evaluation revealed the pertinence and the amplitude of the actions of the Ibakwe group in the field. It allowed orienting their work towards the needs identified by a recent study of Rwandan society.

One thought on “IBAKWE Association in Rwanda”