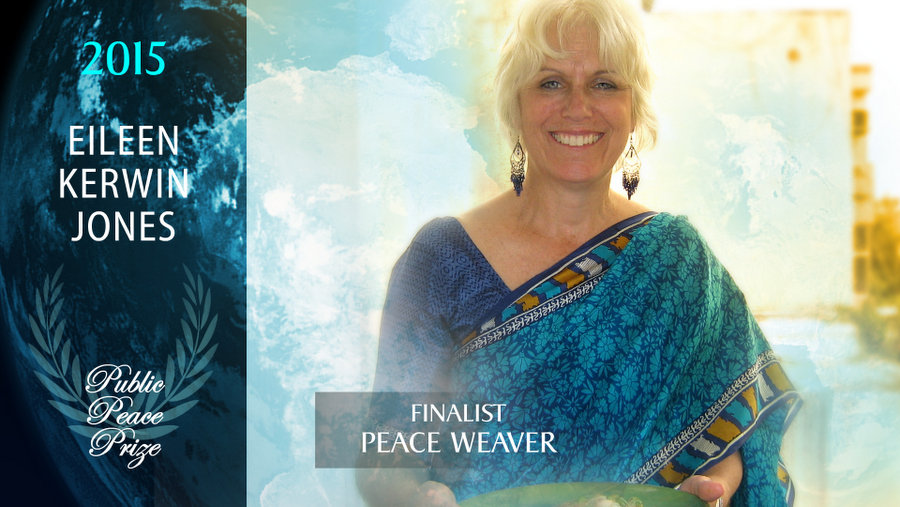 Eileen Kerwin was born in Montreal to an Irish-Catholic family. A mother of five children, she holds a BSc. in nursing from McGill University in 1976, followed by emergency room nursing at the Montreal General Hospital. Later she got a Masters in Ethics followed by a PhD at Saint-Paul University, Ottawa, which led her to organise these multiple threads of social understanding into the focused research and activism in her present life. Research in Bangladesh, teaching ethics, economics and international health in Kenya at Great Lakes University in Kisumu and working in New Delhi with World Health Partners, an NGO with a focus on women’s reproductive health, was followed by her founding with colleagues of the NGO PACT–Ottawa.

Eileen works for peace both as an intellectual and as a feminist, and has succeeded in bringing her understanding of the clinical and public health aspects of maternal mortality into the forum of ethics and public policy. She has followed up on her original research with work on the ethical costs of human trafficking around the world.

An excellent organizer, she is a key founding member of PACT-Ottawa (Persons Against the Crime of Trafficking in Humans). As a teacher at John Abbot College, Eileen has led a generation of students to a wider, more compassionate worldview, learning to understand how they are affected by interlocking oppressions of race, gender, and economic status. Through her words and through her example, she inspires them to change the world.

Her interest in “the other” was furthered by work as an outpost nurse in Innu communities in northern Quebec. Here she saw clearly how poverty, racism and cultural intolerance unjustly shaped the lives of the people with whom she lived; injustices that she discerned denied the possibility of peace. She experienced first-hand how healthy and flourishing communities were unattainable in a context of social and cultural decimation.

Raising a family of five children has periodically interrupted her professional work. However, motherhood also stimulated her awareness of gender as a social determinant of personal and community health and inspired her studies into the value of women’s work and their contributions to all economies, despite their often marginalized status. For Eileen, the fact that so many women suffer structural injustices that deny them their fundamental human rights runs counter to any concept of right relation and a just and peaceful world.

Ms. Kerwin-Jones began teaching at John Abbott College in the Humanities-Philosophy-Religion Department, and later became Associate Dean, whose responsibilities include the Women’s Studies and Gender Relations Certificate. It is through her work with students, lectures and advocacy work on the issues of human trafficking and modern slavery, however, that her impact has resonated far beyond the college gates.

She inspired her students to volunteer in a Respect is Sexy education campaign during Sexual Health Week and helped to create campus-wide awareness of the 16 days of global activism for violence against women, as well as contributing to a campaign about sexual consent.

Her economic analysis of social conflict is not without hope for empowerment of the vulnerable, as well as transformation for the powerful.

As one of the founding directors on the Board, Eileen assisted in the incorporation of PACT-Ottawa, a non-profit organization that has achieved national recognition for its work on human trafficking.  Eileen Kerwin-Jones’ leadership as Director of Education saw thousands of young people and other community members receive information and tools to combat this modern form of slavery.  Her engaging style and ability to communicate with diverse audiences has made Eileen very much in demand as a speaker on this important social phenomenon.  It is primarily their education work that prompted Crime Prevention Ottawa to recognize PACT-Ottawa as a finalist for the Community Safety Award in 2012.

Through this organization, Eileen has advocated for trafficking victims, led courses for youth, presented to faith groups and government organizations, and produced educational and informational resources to further awareness about this disturbing crime.

Her impact as a public speaker for PACT, along with educational initiatives and liaisons that she created with local and national networks resulted in new legislature on human trafficking in Canada. These are clear indicators of her determination to address injustice and to do something about it. She believes that peace will never be obtained unless we understand that we cannot take advantage of, or disempower another human being.

Her vision of a more just society where people of both genders and all origins enjoy equality and freedom from exploitation has been a guiding force for this grassroots NGO.

The work Eileen has done at PACT-Ottawa to bring the public in general, and especially youth, to a better knowledge of human trafficking in an attempt to put an end to this modern day slavery is indeed the work of a great peacemaker!