Art as a Passport for Peace

The African Artists Peace Initiative (AAPI) is a Pan-African movement of artists and peace-makers, championing a culture of peace and non-violence in Africa. The overarching objective is to use ”The ARTS” as a weapon and tool for nurturing a culture of peace based on values, attitude, and ways of life conducive to the promotion of peace among individuals, groups and society. 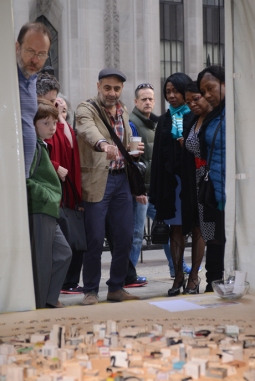 Artist Issam Kourbaj at St. Paul’s Chapel and with his installation, Another Day Lost, in Trinity Church’s south churchyard.

An art installation at Trinity Church, Wall Street, New York, is using waste materials to invoke images of refugee camps in an attempt to “foster awareness and spur greater relief efforts on the part of citizens and governments worldwide” for Syrian refugees.

The installation, Another Day Lost, has been installed in the churchyard and parish centre as part Trinity Wall Street’s art-as-advocacy project. It has been created by UK-based Syrian-born artist Issam Kourbaj, and is inspired by aerial photographs of refugee camps.

“Another Day Lost offers a sombre perspective on the human cost of the Syrian civil war,” Trinity’s director of justice and reconciliation, the Revd Winnie Varghese, said. “Though far away, we cannot stand by at a time when worldwide, we are faced with a desperate humanitarian crisis. Growing numbers of people need asylum. In global partnership, we must find ways to welcome the stranger to our midst.”

The Episcopal Church has been vocal in its efforts to encourage the United States to accept greater numbers of Syrian refugees. 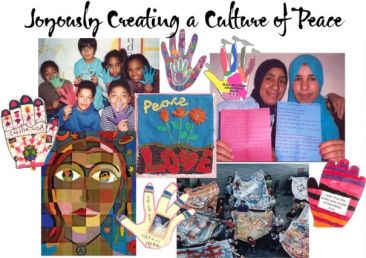 The mission of the Global Art Project is to joyously create a culture of peace through art. The Project celebrates diversity and multi-culturalism while expressing the idea: We Are All One.

The Global Art Project is an International Art Exchange for Peace. Here’s how it works: Participants create a work of art in any medium, expressing their vision of global peace and goodwill. The art is displayed locally in each participant’s community. Global Art Project then organizes an international exchange by matching participants—group-to-group and individual-to-individual. The exchange occurs April 23-30 biennially, resulting in thousands of people sending messages of Peace around the world at one time—visions of unity simultaneously encircle the Earth. The art is sent as a gift of global friendship and exhibited in the receiving community.

Participants may send documentation of the art created and of the people who came together to create the art to the GAP Art Bank. Global Art Project exhibitions, books, slide presentations, and this website give people an opportunity to experience visions of peace and unity created by individuals from diverse cultures around the world. 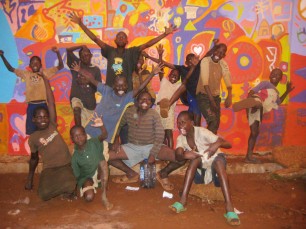 Create Peace Project was founded in May of 2008 by Ross Holzman in San Francisco, CA. CPP was formed in response to the overwhelming amount of violence in the world, the violence and negativity streaming through the mass media, coupled with the severe lack of creative arts in people’s lives, the deterioration of arts-programing in U.S. public schools, and the suffering people are experiencing as a result. Create Peace Project is responding to growing need to strengthen human connection, cultivate self-awareness, spread hope and create peace in people’s lives.

By educating, empowering and activating joyous feelings of self-worth using the universal language of creativity, Create Peace Project achieves it mission of strengthening community and fostering self-awareness through our arts-for-peace practices.

Mentoring Peace Through Art identifies, engages, and develops leadership potential of young individuals through art projects that serve the social needs of diverse communities. This mission is accomplished through its two programs: MuralWorks® in the Streets and MuralWorks® in the Schools.

Whether on the streets or in the classroom, Mentoring Peace Through Art immerses young people in the real-life situation of working together. Regardless of their talent, ability or cultural background, every MuralWorker® is essential to the success of the group: Actionable teamwork turns into a positive work ethic, which, in turn, results in a genuine feeling of self-worth by all participants.

Mark Zuckerberg to give 99% of Facebook stock
to charity

In the post, written as a letter to their new baby, Zuckerberg and Chan began: “Your mother and I don’t yet have the words to describe the hope you give us for the future. Your new life is full of promise, and we hope you will be happy and healthy so you can explore it fully. You’ve already given us a reason to reflect on the world we hope you live in. Like all parents, we want you to grow up in a world better than ours today.”

The co-founder doesn’t plan to give away more than $1 billion a year for at least the next three years, the company said in a separate filing, meaning Zuckerberg will still maintain voting control of Facebook for the foreseeable future.

More details will be released in the months ahead as how the organization and the donations will be doled out, but already some are speculating that it might be the largest donation pledged in history.

Youth and Training in Action for a Peaceful Future 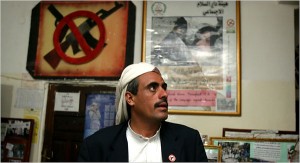 Melodic calls to prayer rise upward, echoing across Yemen’s capital city of Sana’a. Children gleefully run down a flooded street in Old City, past buildings with striking geometric patterns made from burnt red brick and white gypsum. Then a whistling noise cuts through the air, followed by explosions.

Hope lies at the edge of the city – at the Dar Al-Salaam Organisation (DASO) which means “House of Peace”. Founded in 1997 by Sheikh Abdulrahman Al-Marwani, DASO is a Yemeni NGO working in conflict resolution, negotiation and countering violent extremism through engagement of tribal and religious leaders and by working with youth. Fiercely driven by his devout Sufi beliefs and a vision of a peaceful Yemen, Sheikh Al-Marwani travels throughout his country tackling volatile and seemingly intractable conflicts.

It is there, within Yemen’s remote villages and towns, that Al-Marwani and DASO work hard for stability by negotiating peace between tribal leaders. This work is not without risk. At least 15 members of DASO have been killed in crossfire between warring tribes as a result of their peacemaking work.[v] The Sheikh, himself, has been targeted for murder. Yet he fearlessly continues his work, despite the risks and the toll it takes:

“Sometimes I can’t sleep…sometimes I feel my head is going to explode but let me tell you: I would give my life if only the world could live in peace.” – Sheikh Abdulrahman Al-Marwani

Arab-Jewish School An Island Of Unity Amid Violence

Presto ID 74668290 This is the Jaffa branch of ìYad bíYadî ó or ìHand in Handî in both Hebrew and Arabic ó a school made up of four kindergarten and two first-grade classes that aims to respond to growing Jewish-Arab segregation and violence with mutual respect and open dialogue. [Via MerlinFTP Drop]

“This is the only place where we feel that my children, and my neighbor’s children, are secure.”

JAFFA, Israel — Amid ongoing violence between Palestinians and Israelis, a school in this city seems more determined than ever to teach Arab and Jewish children about coexistence.

In a sunny playground here just 3 miles south of Tel Aviv, children paint recycled tires in vibrant colors and refurbish wooden furniture to beautify a place that many in the community say is their best chance at a peaceful future.

This is the Jaffa branch of “Yad b’Yad” — or “Hand in Hand” in both Hebrew and Arabic — a school made up of four kindergarten and two first-grade classes that aims to respond to growing Jewish-Arab segregation and violence with mutual respect and open dialogue.

Support these actions for Peace!

Compose a comment of support at the bottom of the page on the website or email at:
contact@publicpeaceprize.org

The initiatives that receive enough support, in the form of comments that add up to 100 lines of text, will automatically be nominated for the Public Peace Prize – Read the details.

One thought on “Art, Altruism and Youth for Peace”