It’s the first time in the history of the PPP that all the finalists are recognized as winners in their respective categories, and that a man and a woman are both laureates in the same category: GLOBAL PEACE and RECONCILIATION INTERNATIONALLY-REPUTED PEACEMAKER

All of the laureates received considerable support from the public, both in terms of the quantity of “votes” acquired, and the quality of the comments and the support letters received. Marie Dennis is the laureate who received the greatest number of supporting gestures overall, from a largely international audience.

We wish to congratulate these peacemakers for both their determination and their contributions, along with others, to the pursuit of durable peace that is rooted in respect for human dignity and the conviction that it is possible to live in a world without violence or exclusion.

The Laureates for the 2016 Edition of the Public Peace Prize are :

Marie DENNIS, of the United States, is a respected icon of peace and reconciliation movements on an international scale. Her implication in a number of endeavours reuniting a compassionate vision, the art of negotiation and spiritual wisdom and her contribution to intercultural and interreligious dialogues are indispensable to world peace. A large number of her project partners and people who have witnessed her work from several countries have expressed their support and admiration to this laureate of the 2016 Public Peace Prize as GLOBAL PEACE and RECONCILIATION INTERNATIONALLY-REPUTED PEACEMAKER.

Read the complete profile and the letters of this support for this nomination in their original language at:
https://publicpeaceprize.org/marie-dennis-2016/

Michael LAPSLEY, a priest from South Africa who works with victims as well as authors of apartheid and other forms of repression and exclusion, is publicly recognized for his disarming strength that has transformed wounds into powerful healing and reconciliation. The numerous comments and support received online focused on his courage, his approach for healing memories, and warmly recommended he be recognized as GLOBAL PEACE and RECONCILIATION INTERNATIONALLY-REPUTED PEACEMAKER for the 2016 Public Peace Prize.

Read the complete profile and the letters of this support for this nomination in their original language at: https://publicpeaceprize.org/michael-lapsley/

JUSTICE and SOLIDARITY ACTIVIST and PEACEMAKER

Suzanne LOISELLE is an international peace and justice activist working from Quebec, Canada. Through her actions as well as her words, she affirms that peace is not possible without justice, and solidarity can only be achieved by analyzing and driving out repressive, warlike tendencies and condemning the racism that divides communities. Suzanne received a large volume of support, in particular from Canada but also from countries such as Brazil and Haiti, recommending the she be attributed the 2016 Public Peace Prize as JUSTICE and SOLIDARITY ACTIVIST and PEACEMAKER

Read the complete profile at:
https://publicpeaceprize.org/suzanne-loiselle/

Read all the letters of this support for this nomination in their original language at:
http://prixpublicpaix.org/suzanne-loiselle/

Antoinette LAYOUN is a therapist and a yoga master in Quebec (Canada). From her experience as a child soldier in Lebanon, Antoinette came away filled with the strength of love and now artfully teaches a way to inner peace that allows people to share their personal peace through constructive, loving lives. The numerous warm comments received from the public that is familiar with her workshops allowed her to be discerned with the 2016 Public Peace Prize as PERSONAL PEACE WEAVER and SOCIAL PEACEMAKER.

Read the complete profile at:
https://publicpeaceprize.org/antoinette-layoun/

Read all the letters of this support for this nomination in their original language (French) at:
http://prixpublicpaix.org/antoinette-layoun/

Narine DAT SOOKRAM is a Canadian with Guyanese roots who is an excellent example of the rich social and economic contribution made by immigrants. The huge number of letters of support sent in shows the trust and gratitude of those who have crossed paths with him from across Canada. These letters came mostly from fellow citizens, confronted with the same challenges of integration into an adopted country, and have led him to be awarded with the 2016 Public Peace Prize for SOCIAL INTEGRATION and COMMUNITY PEACEMAKER

Read the complete profile and all the letters of this support for this nomination in their original language at:
https://publicpeaceprize.org/narine-dat-sookram-2016/

About the Public Peace Prize

The Public Peace Prize is a citizen’s initiative without borders. Its only goal is to make better known as many peacemakers and peace initiatives as possible, beyond all forms of competition!

Unlike other prizes that only disclose the names of the winners; the Public Peace Prize reveals all nominations that have received sufficient support according to an exposed procedure. The voting process invites the public to manifest their appreciation for peacemakers, and to make better known their initiatives, above and beyond all forms of competition.

The method of evaluation takes into consideration public support and several elements counterbalanced according to the impact of the actions of the nominated person or group and their influence on a local, national or international scale.

Every year the jury establishes the prize categories that are best adjusted to the nominations received. It has been decided that for the 2016 edition, the GLOBAL PEACE and RECONCILIATION INTERNATIONALLY-REPUTED PEACEMAKER prize will be awarded to both a male and a female nominee. 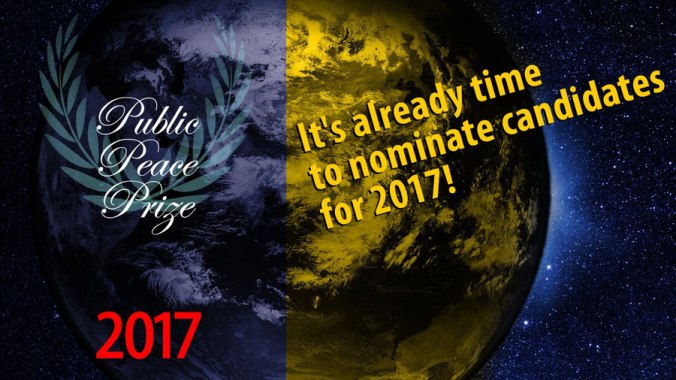 IT’S TIME TO PROPOSE A PERSON, A GROUP OR AN INITIATIVE FOR PUBLIC PEACE PRIZE 2017!

Send the name of a peacemaker and the reasons why they should be nominated to: