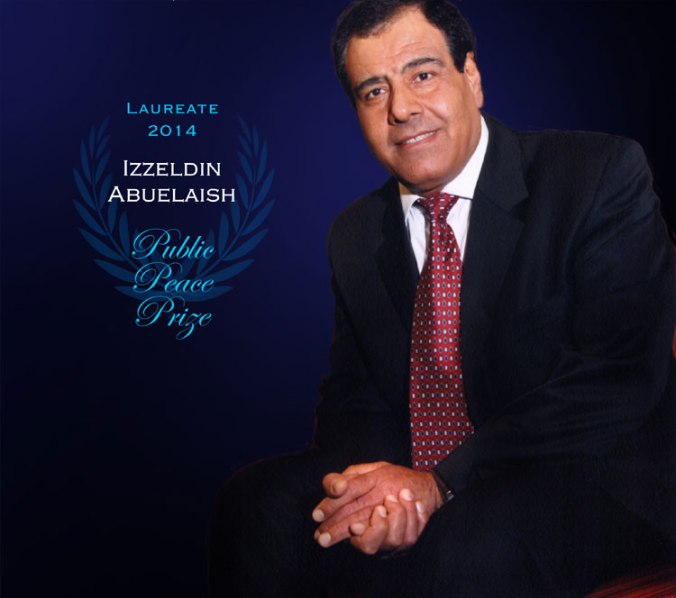 Dr. Izzeldin Abuelaish, OOnt, MD, MPH, is a Palestinian physician and an internationally recognized human rights and inspirational peace activist devoted to advancing health and education opportunities for women and girls in the Middle East, through both his research and his charitable organization The Daughters of Life Foundation.He has dedicated his life to using health as a vehicle for peace, and, despite all odds, succeeded, aided by a great determination of spirit, strong faith, and a stalwart belief in hope and family.

Dr. Abuelaish is the first Palestinian doctor to receive an appointment in Medicine at an Israeli hospital. Through his work, he has had the opportunity to experience the impacts of conflict in countries like Palestine, Egypt, Israel, Uganda, Yemen, Afghanistan, and Saudi Arabia. Working as both an insider and outsider to conflict led him to consider doctors as peace-makers by the moral doctrine of their profession. His work as both a healthcare practitioner and a peace advocate mobilizes health as a tool for peace.

Dr. Abuelaish has overcome many personal hardships, including poverty, violence, and the horrific tragedy of his three daughters’ and niece’s deaths in the 2009 Gaza War. He continues to live up to the description bestowed upon him by an Israeli colleague, as a “magical, secret bridge between Israelis and Palestinians”. He is now one of the most outspoken, prominent and beloved researchers, educators and public speakers on peace and development in the Middle East.

Dr. Abuelaish’s book, I Shall Not Hate: A Gaza Doctor’s Journey, an autobiography of his loss and transformation, has achieved critical acclaim. Published in 2010 (currently in 20 different languages), and inspired by the loss of his three daughters – Bessan, Mayar, and Aya – and their cousin Noor during Israeli shelling on January 16th, 2009, the book has become an international bestseller. It has become a testament to his commitment to forgiveness as the solution to conflict and the catalyst towards peace.

Dr. Abuelaish’s impact on peace-seeking communities is exceptional. He has been invited to give many speeches at various places includingthe Canadian House of Commons, the American Congress, the Chilean Senate and Parliament, the European Parliament at Place Du Luxembourg in Brussels, the State Department, Forum 2000 in Prague, and many more.

In addition, he has given speeches all over the world in academic institutions, universities, and organizations in Canada, the United States, Europe, Africa, and Austral-Asia.

Dr. Abuelaish was awarded the World Citizenship in Action Award by the Canadian Branch of the Registry, and has ranked 59 as one of the 500 most powerful Arabs. He has also been named as one of the 500 Most Influential Muslims five consecutive years by the Royal Islamic Strategic Studies Centre in Jordan and has received a number of national and international awards and nominations in recognition of his advocacy and promotion of Human Rights, Peace and Health. These include The Order Of Ontario, Queen Elizabeth II Diamond Jubilee Medal, Foundation P7V Citizenship Award, Calgary Peace Prize, Lombardy Region Peace Prize, first to receive Mahatma Gandhi Peace Award of Canada, Stavros Niarchos Prize for Survivorship, and Top 25 Canadian Immigrants. He was one of three finalists for the Sakharov Prize for Freedom of Thought and has been nominated for three consecutive years for the Nobel Peace Prize; all the while, support for his candidacy grows exponentially every year.

Many influential figures within the diplomatic community have spoken very highly of Dr. Abuelaish’s work.  In nominating Dr. Abuelaish for the Nobel Peace Prize, the Belgian Parliament named him the “Martin Luther King of the Middle East”. In his nomination for the Sakharov Prize, Dr. David Naylor, then President of the University of Toronto, called Dr. Abuelaish a remarkable ambassador for peace and an exemplar of forgiveness and reconciliation.  The President of the European Parliament, Hans-Gert Pottering spoke of him in his speech in Strasbourg, Germany at the opening of the exhibition “From Hebron to Gaza”. President Barak Obama referred to him as an example of strength and reconciliation in his address on May 19th, 2011 when he discussed the possibility of peace within the Middle East.

Dr. Abuelaish has founded Daughters for Life, a Canadian charity that provides young women in high school and university the opportunity to develop a strong voice and play a more influential role in improving the quality of life through their education throughout the Middle East.

Currently, Dr. Abuelaish lives with his five children in Toronto where he is an associate professor at the Dalla Lana School of Public Health at the University of Toronto.

How do you become a Peacemaker?

The 2014 Public Peace Prize was awarded to two people in the category of Internationally-reputed Peacemakers, one of whom we had the pleasure of interviewing directly for the site. What follows are just a few of the philosophies on peace shared by Dr. Izzeldin Abuelaish, which we hope will inspire you to find your own inner and external practices to create peace within, and around you. Those who know his background have seen him accomplish this in spite of incredible adversity!

What exactly does peacemaking mean?

Is peace just a word? Dr. Abuelaish says peace is a way of life, not just a concept, and not just an absence of war or conflict. It’s something you must not only live by; it must also be given away. Peace can’t thrive in isolation; it needs to be created and experienced in connection to others. Peace is passion, justice, connection, sharing, respect, and freedom.

He used his role as a medical doctor to explain this connectedness in a very concrete way. The unit of structure of any human being is the cell, just like the human being is, in turn, the unit of structure of the entire world. When one cell is suffering, the whole body is suffering. That’s how we need to see life, and how we need to feel, react, and respond – from this viewpoint. When a fellow human being shares their suffering, you feel it and are a part of it. When there’s suffering in one place on the planet, it’s also my suffering. Lack of freedom elsewhere is also my lack of freedom. So the question then becomes “How can we work as one to support each other?” And this perspective brings not only peace, but happiness. It’s about connectedness – really feeling, really seeing someone else, and knowing the mutual connection is there; that’s what is most needed.

How does one become a peacemaker?

First and foremost, he stressed the importance of simply moving forward; being involved in life and knowing what we want, by repeating Einstein’s famous quote: “Life is like riding a bicycle; in order to stay balanced, you have to keep on moving.” Dr. Abuelaish believes there is no greater challenge than the lack of personal responsibility, and recognizes that we’re always trying to take the easiest way out to escape responsibilities. Important ingredients for moving forward are the knowledge of what exactly we want, and making a plan to achieve it. People need to ask themselves what kind of a legacy they want to leave behind. Sometimes people just let the wind move them, but even then, if they keep on moving, pushing forward against the wind builds positive resiliency.

What does it take to lead others towards peaceful practices?

Dr. Abuelaish believes personal leadership begins with accepting responsibility for where you stand and how you act, transcending the circumstances and situations that make up our lives to become a way of interacting with the world from the inside-out. We need to be creative and not just reactive. In countries that are not at war, the inner pain from which many suffer comes from a loss of passion and connection, of not knowing what we want from our lives. He says, “Don’t underestimate yourself. The first step in failure is to lose confidence in yourself. Don’t reject yourself and believe you cannot make it. If others have made it, so can you.” He also tells people they must have faith in something, that Life is Hope. We live for the hope of something good happening. But you need to act on it as well. To grow, faith and hope need action, hard work, and confidence. He also explained that peace should be a choice; it can’t be attained by force.

How do we bring this vision of “connectedness” you speak of to others?

Through awareness. Through educational efforts; each of us must do their part. Start with yourself. Start with your neighbours, your colleagues at work. Talk to them, communicate with them. Awareness triggers a change in behaviour and in people’s attitudes to get them to start looking around and asking questions. Once people start noticing what’s going on out there, beyond their own lives, they start learning and discovering ways they can help. Too much action comes from a place of ignorance, a lack of knowledge about others. “Don’t argue with the ignorant, because he will never understand, or the one who is stubborn, because he will never be convinced. Don’t waste your time with arrogance or those who are biased, for they will never listen.” How can we minimize stubbornness, arrogance and bias? Through awareness; education… enlarging people’s range of vision allows to break down barriers. This requires the efforts of many of us working together. One person can’t do everything, but each of us can do something. When we bring these small actions together, the movement will spread until it becomes huge… just like drops of water that make up the rain and make up the oceans.

How do you see the role of the Public Peace Prize?

The role of the Public Peace Prize is to open up people’s eyes to what others are doing. By presenting some peacemakers stories, it’s saying “Look! They did it, and you can do it too. When I wrote my book about my life in Gaza and the loss of my daughters and my niece, I told people that I was writing it as a message of hope – a human message. I was challenged in my life, but I succeeded in overcoming these challenges, and was able to continue to move forward. It’s not theoretical – I’m not sitting in a tower and talking down to people – no, I lived it, and I don’t want you to experience the same, but as I was able to move beyond the difficulties, you can do it do.”

“The only true peace that is just and good – not just for one, but just and good for all – is collective peace.” Dr. Izzeldin Abuelaish